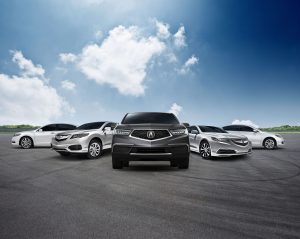 Twenty years ago, husband Don and I embarked on an entrepreneurial journey with the purchase of Valencia Acura at a time when the dealership ranked dead last nationally in sales and customer satisfaction. Add to that, the Acura brand was still in its infancy having only been around 10 years.

Since that time, not only has Valencia Acura strived to infuse a friendship culture over the past two decades of treating customers the way we ourselves want to be treated, but we are so fortunate and privileged to have such amazing vehicles to sell and service each and every day.

History shows that Acura not only redefined the luxury car, it permanently changed the luxury marketplace from a slow evolution among a handful of brands to fierce competition between many.

When purchasing or leasing a vehicle, there are factors beyond style, price and performance to consider. There’s the cost of vehicle ownership – cost of fuel, financing, insurance, depreciation, and scheduled maintenance and repairs – that should factor into a purchase decision.

In addition to winning the overall luxury brand award, the Acura lineup placed first or second in more than half of the seven total 5-Year Cost to Own factors, which include the upfront cost of the vehicle, depreciation, finance and insurance fees, expected fuel costs, maintenance and repair costs, and state fees.

According to Kelley Blue Book, while value and luxury are often seen as mutually exclusive concepts, much of Acura’s appeal can be attributed to the fact that it delivers both. Further, Acura models are priced lower than segment alternatives from competitive brands. They also hold their value incredibly well.

“If you’re looking for the prestige and tradition that distinguish European luxury brands, you’re going to have to pony up. But if you’re instead more interested in the practical advantages of a premium-priced vehicle — a quieter cabin, more comfortable seats, higher-quality interior appointments and such — Acura delivers for less,” Kelley Blue Book states. “A reputation for trouble-free, low-cost ownership is another key draw. Combined with the typically superior dealership experience, warranty and fringe benefits that further differentiate the luxury segment nowadays, it’s clear that Acura delivers serious bang for the buck.”

Now in its 30th year, it is clear that the exceptional quality and reliability of Acura products leads the luxury segment. Today, most of Acura’s lineup is engineered and manufactured in North America.

Celebrating 20 years of friendship, Valencia Acura is now one of Acura’s highest ranking dealerships in customer satisfaction, and one of the highest in the nation for customer loyalty. Stop by and see for yourself what all the excitement is about.